skip to main | skip to sidebar

You know what I did this morning?  I ate a bowl of cereal, drank a cup of coffee, answered a phone call from my mom, went to the bathroom, had a bit more coffee, had a shower, and then answered some emails. All in the same 45 minutes. Uninterrupted.  Who's life is this?  What happened to my harried mornings with a newborn that sleeps less and less as he grows?   Let me introduce you to my new favourite toy. It swings (at 5 different speeds) and plays a variety of white noise music or some baby appropriate lullabies.  A swing that I have affectionately named "Saving Mom's Sanity Swing".   So, a few months back, in anticipation of the arrival of our little one and after the completion of our new home, my older sister was all too happy to clear out her basement of the discarded baby gear that her own children have grown out of, and send it our way. My mom cleaned it all up, and it arrived here into our basement in a heap of colourful toys, seats, springs and even short musical interludes if you kicked or moved one of the pieces by accident when you walked by.

This little gem was rescued from the baby entertainment rubble downstairs recently, and we finally figured out how to set up last night (not without the obligatory tense moments and terse words that are customary for setting up any child's toy mind you).  Anyway, Rory LOVES it. Hooray!!   Rory gets some swinging stimulation and I get a shower. Win win if you ask me.   I wonder what else is in the basement?  Truth be told, as a new mom I worry all the time about stimulating Rory enough.  His shelf life is about 20 minutes for tummy time, then we play kick and exercise with my help, he then plays in his baby seat with some attention getting toys, and NOW the piece that seems to be winning out over all - this glorious swing. He's a bit small yet, but we're making it work.  It's a happy day. 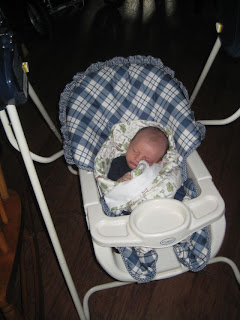 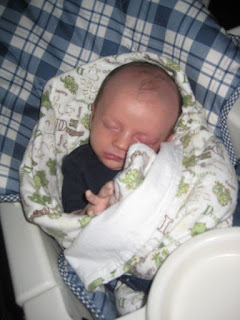 Life as a mom

It's hard to believe a month has already come and gone in my new life as a mom. It really seems like just yesterday (like a whole 9 1/2 months) that Peter and I were married and a baby was a distant future thought. haha. What a year!  Anyway, so far... being a mom is awesome. Some how its everything and nothing I expected it to be all at the same time.  Rory makes us laugh, makes us cry (sometimes because we're happy, and admittedly sometimes because mommy is tired) and really just has completely changed our lives for the better.  Its amazing how someone so small can have such a quick and profound effect on your values and priorities as a couple... not to mention a schedule, the ability to do things spontaneously, alcohol tolerance, bladder control, whats strewn across your living room floor and coffee table, the frequency of laundry loads, what you spend your time reading and googling, your ability to function on limited or no sleep and of course the subject of your smiles and chatter with just about everyone.

So... what do I feel I know today that I didn't before June 23rd?  Well, most importantly that we have been blessed with a wonderfully good baby. He is happy 80% of the time, the other 20% he spends smiling or telling us what he needs with a short cry... like food, a diaper change, a change in scenery, a cuddle, or some sleep.  That the love I felt for Rory in the delivery room doesn't compare to how I felt on day two, or day three, or day four, or at his one month etc etc.  Our love really does grow and get stronger everyday as Rory has become a member of our family.  What else do I know?  Well, no matter what anyone tells you none of it is easy, and its all harder than it looks (i.e. breast feeding, knowing whats right and whats wrong and when, who to listen to when you get conflicting professional opinions, and making choices that will impact a life that is not your own forever). What else?  Babys give your relationship a lot of uncharted rocky roads to travel so having a strong one before a baby arrives worked to our favor, being a new mom there is no one that has provided more comfort and reassurance and peace of mind than my own mom, that strangers and loved ones alike give far too much advice to new moms and regardless of how good, bad, important or useless the information is... if you're like me you will need to or want to, figure it out on your own anyway.  And finally that being a parent is handsdown the most rewarding thing I have ever done and that having a healthy baby is really all a parent can ask for.

We have had a busy month that was marked by a wonderful three week babymoon that Peter was off for and and an 8 (or 9) day visit from my mom, and our first major event (a Cobourg wedding) on the weekend. As July winds down, we are looking forward to our debut in Almonte on the 5th of August to meet the valley friends and family and for Adam & Kelly's wedding.!

Finally here is what is on my mind today; enjoying your life right now, today.  The one thing that is constantly on my mind is how far I am from my family and that I want Rory to grow up with the same values and experiences that Peter and I had in small towns vs this big city. Anyway, I got this today from a friend and and it was a good reminder for me that life is so short... that goals and lists of things you want to do will always be there and while it's important to be ambitious with goals and having a vision of what you want your future to look like is key, that it's also important to be present in the life you're living today. To enjoy the moments you're experiencing now.  So that is what I am doing today... enjoying these precious moments with my newborn that I know will be gone before I know it. 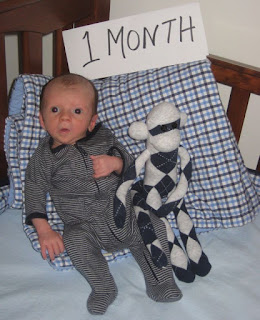 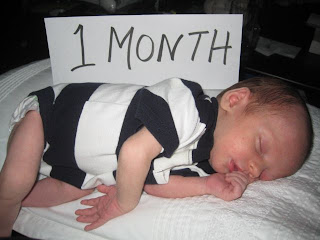 Well... the babymoon has officially ended. Peter went back to work on Monday and Rory and I have started our playcation (what we are calling our summer of mat leave together).  Day 1.5  and we're doing very well!! We made it out for a big walk yesterday, we had time to do some house work and make dinner for daddy, and most importantly we had lots of time to play.

Our little guy is GROWING!  Well I think he is anyway, he is eating NON-STOP,  in fact sometimes I feel like that is all I do... breastfeed.  We just finish and we start again. But eating is a good thing and we're excited to see how much Rory has grown next week at our doctor's appointment. So,  other than feeling like a milk machine...literally, I don't have much to tell you.  A three week babymoon did wonders for us all.   I did have a "moment" the other night though.  Peter suggested on Friday evening that maybe I would like to get out of the house and go for a walk on my own. After a quick think about it (Rory had just been fed and was sleeping very peacefully), I then couldn't get into my work out gear and out the door fast enough! Off I went with my ipod in hand, and I didn't even make it to the neighboring street before my eyes welled up with tears.  It had been a long time since I could walk that fast, or that far, and it had been 2 1/2 weeks since I had done ANYTHING for even a MINUTE on my own.  I walked and walked and walked while listening to my favourite running and work out music from last summer. It reminded me of the days, weeks and months leading up to our wedding. Which made me happy. We've come a long way in the 9 months following our wedding. Anyway the walk did wonders for me, it made me feel like me again. Something I hadn't felt in a long time. It reinforced the working plan Peter and I have (albeit sometimes easier said than done with a newborn) to incorporate Rory into our lives and lifestyle vs. us fitting into his. Yeah check back with me in a bit to see how that's working out for us! 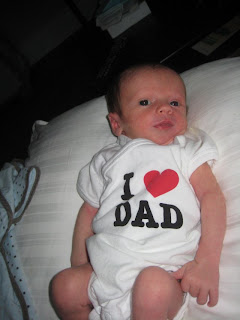 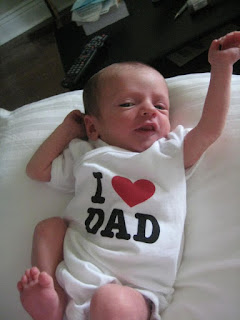 Today our little bundle of love is two weeks old.  It’s really hard to believe. Hard to believe still that I am a mom, that Peter is a dad, and that we have a son. But also hard to imagine our lives without this little guy now too.  I am nervous to put this out there given every time I told you things were going exceptionally well when I was pregnant they would head south quickly… but things are going really well.  I didn’t think I would adjust to being a mom so easily, or so quickly, but I have, we have.  And I love it. We love it. Our little family two weeks in, has faired extremely well. Knock on wood.

Our biggest concern these days is making sure Rory is eating well.  And he is! This week at his weigh in we were delighted to find out he has gained back his birth weight and some… he will be a strapping young lad in no time.  Breastfeeding has also been going well (knock on wood again), sure there are challenging moments… like how hot and gross it is right now, and believe me when I tell you that skin to skin contact just isn’t that precious when the humidex is above 43 degrees. Or the sorting out of supply and demand so I am not in a constant state of throbbing soreness… but all the little challenges seem so insignificant when we look at this little guy.  He won’t be this little forever, so we are savoring every moment. And as much as I want to see him grow and gain weight, I also want these moments of our babymoon with just the three of us to last forever.

Speaking of babymoon, we’re in the home stretch. Peter heads back to work on Monday of next week. I well up with tears at the thought of it. Like as I am typing now.  I would love to keep the three of us in the little perfect babymoon cocoon we have been living in forever. To sleep as we wish, to eat healthy, to have time to talk and to laugh, to take long walks, to run errands as we please and of course to stare at our baby as he grows and changes by the day. It’s been wonderful.   So as the babymoon winds down, Rory and I are winding up our “playcation”.  In other words, making playdates to keep us socializing (and mommy not too lonely that she gets sad).

So as we celebrate the first two weeks of Rory’s life, here are a few new pictures to share with you.  Yeah, he knows how to give thumbs up already. Smart kid. 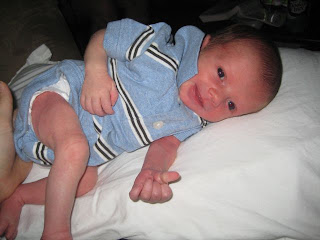 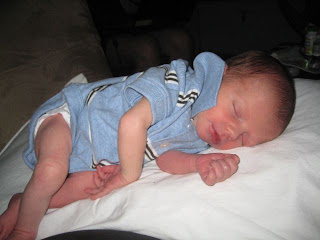 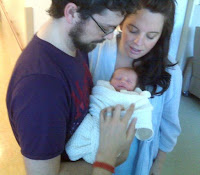 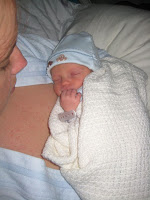 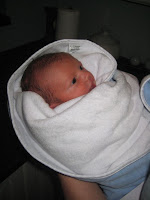 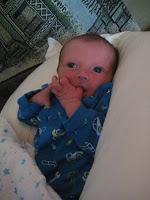 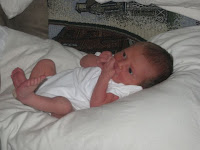 Posted by Eat Pray Run Lose Love at 10:36 AM No comments: